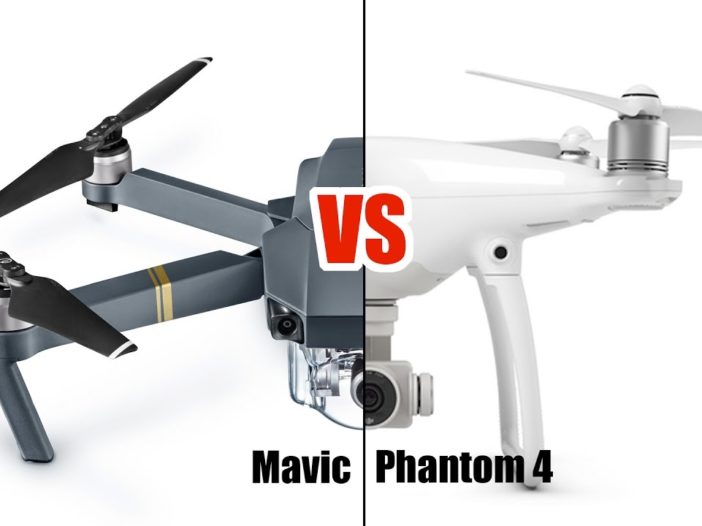 Both of DJI’s top consumer drone models are excellent choices — great quality, speed, and controls. That said, there are a few differences that are noticeable, mainly portability and functionality.

I’ve owned (and crashed) both models so have given both a fair chance in comparing them below.

The biggest advantage it has over the Phantom is simply it’s size. I can fit it in a regular backpack along with some clothes and books. Absolutely no issues carrying it around and it’s highly portable and compact. This is hands-down why I personally prefer the Mavic — I can throw it in my back pack and people don’t know I have it, whereas a Phantom looks like I’m carrying around a box of fish. Of course you can get a cool carrying case for a phantom that makes it easier to lug around.

The top speed for the Phantom is actually slightly higher, the battery life is pretty much equal. There are some extra features on the Mavic like obstacle avoidance when landing, which is a nice feature the Phantom doesn’t have. I like this because it means I crash less.

The Phantom can actually carry more weight than a Mavic so if you’re planning on hanging stuff and flying around then the Phantom is the obvious choice.

The Mavic controller is smaller, lighter, and feels cool like you’re playing a video game. The Phantom seems more like you’re operating a proper machine and is a bit heavier.

I really enjoy using my iPad for the Phantom as it’s a larger screen and easier to see where I’m going. Unfortunately the Mavic controller is only equipped for smartphone usage and an iPad mini won’t fit, so you’ll have to get a separate add-on.

The camera on the Phantom is a little bit bigger than the Mavic, but captures the same quality videos in 4k. This simply means the frame size of the mavic videos is bigger.

The biggest transition I had to make switching from a Phantom to a Mavic is the auto-focus function. If you don’t manually tap the screen to focus in on a picture, then your pictures might come out blurry. This was a little bit annoying, but I got used to it.

Here’s a good video that compares the video quality:

The Mavic is smaller so you would think it would be less resistant, which I found to be true at higher altitudes. Or, at least the warning of “high wind” appeared more frequently. But it was never a very noticeable issue when recording and overall both drones did pretty well.

Here’s a guy leaf-blowing some drones.

So, which one is better?

In conclusion, it’s a tough call, and depends on what you’re using it for. The Mavic is more portable so if you plan on carrying your drone around to several places in one day, or if you’re climbing some big mountains, then it’s the obvious choice. But are you planning on lifting things? Maybe droning some golf balls across the golf course? Or racing? Or just using it one location where you don’t have to haul it around? Then you might be fine with a Phantom.

All in all, they are both great drones.