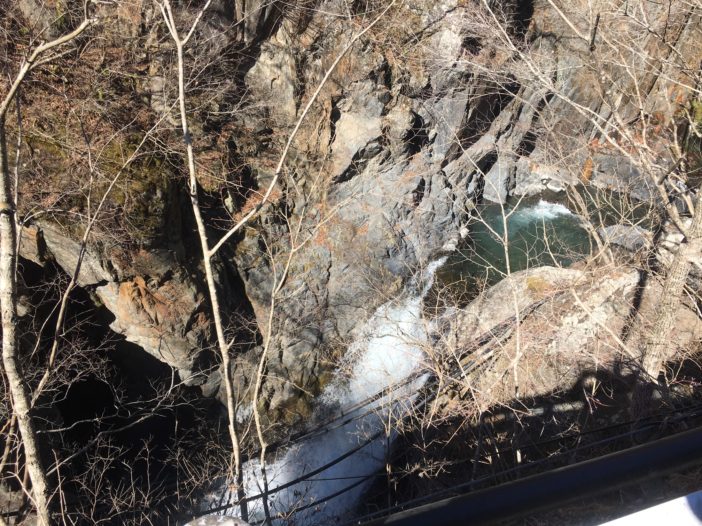 I took a weekend trip out to Shizuoka, Japan (1.5 hours south west of Tokyo) with only one goal in mind: to get some awesome drone pics and video. I arrived at Shizuka station and trekked an hour north through the valley of the luscious forest, towards Umegashima forest.

After an arduous journey of winding roads, I found myself alone at the mouth of Akamizu no Taki, or the slightly redundant Red Waters Waterfall. It was the perfect spot and conditions were ideal to fly — blue skies and no wind.

Then I totally bombed it…

Woops. Well, fortunately the DJI Go app saves a low quality video directly to your device so despite loosing the memory card (and not to mention the entire drone), at least I have the video. After climbing up the side of the waterfall to inspect the wreckage of my beloved Phantom 4, well, I couldn’t even find the drone. Perhaps it was stuck somewhere out of sight or was swallowed whole by the merciless rapids.

However, I did find the culprit, or culprits. Tree branches and cables. What the hell are cables doing dangling around a waterfall? It doesn’t matter so much, but there they were in plain sight. Most certainly a death trap for any flying machine trying to get past. After mourning the tragic loss of my precious, not inexpensive Phantom 4, I wiped off my tears and came up with some ground rules moving forward to avoid the situation. I don’t want to kill any more innocent Phantoms after all.

Drone tips for next time:

Always double check where you’re going to fly, before your fly. I checked the waterfall…after I flew my drone straight into the mouth of the beast. See, you’re supposed to do the opposite. Lesson learned. Plan your flight path beforehand and inspect any potential obstructions.

Bring a friend. Four eyes are better than two. You can fly and your friend can watch to make sure the drone is on a safe flight path.

Keep your eye on the drone. Drones don’t have a 360 viewing capability, so despite the great sensors the DJI has it won’t stop the drone from flying into a tree. You should have all eyes on the drone.

Drones are not indestructible. For some reasons I had convinced myself that DJI’s products were sent down from the gods. It’s like thinking an Apple computer can never get a virus…until it does. When it comes to flying unmanned aerial vehicles that travel at high speeds, its best to leave your ego at the door.

Next time, well, I hope there’s no next time. 🙂